Do shoes make the man?

That’s what they say.  As a statement this might be a bit over the top but undeniably shoes are absolutely critical in anchoring and finishing your look.  For me shoes are the most personal aspect of a man’s wardrobe.  Each guy has a few types and styles of shoe that he simply feels comfortable in – this is from both a physical stand point as well as from a style point of view.

In most cases we we don’t accessorize in the same way as women; as such shoes take on that role and allow us some freedom to express ourselves.  With that in mind I’m disinclined to say exactly what shoes you should own as it’s such an individual decision.  Instead I’ve decided to go over my shoes collection as a way to share what I think makes up a basic shoe wardrobe. 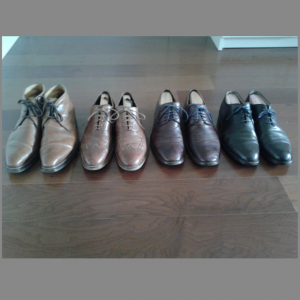 I’ll start by addressing what you don’t see in the above image – a pair of black shoes.  I don’t wear black – be it clothing or shoes – simply because I find it too formal from a personal point of view.  That said I know many guys who wear primarily black shoes (and clothes for that matter) and they look great.  Like I said shoes are personal and a reflection of your own tastes. In my case I love the personality of a brown shoe and the different patinas that naturally form with them.

Before going further a note of caution – if you wear dress shoes in the work environment you need at a minimum two pairs of shoes.  A rest day between each use is crucial to increase the life span of the shoe.  While resting your shoes need to have wooden shoe trees inserted – this maintains their shape and absorbs the moisture, sweat and smells that your feet inflict on the shoe during each use.   With that in mind because I’m in a suit on a daily I keep four shoes in the rotation – that said all four aren’t used every week.

The two pairs in the middle are my day-to-day workhorses.  A classic brown blucher (second from right) and a mid-brown wing-tip (second from left) work for every look I need whether it be dressed up or down.  Both work as well with suits as they do being paired with a cotton trouser or dark denim.  This is where you should be spending as much as you can afford to.  I find the old adage that “you get what you pay for” to be particularly spot on with shoes.  The difference between a $150 shoe and a $250 shoe is massive – even more so when you jump to the $300 level.  The $250-300 shoes will last 10 years if cared for properly while at $150 you’ll be happy with a year.  At 2.5 uses a week you’re looking at 1,250 uses in 10 years – on a $300 shoe that ends up costing 24 cents a day.  Good value I’d say.

At the far right is my one-piece dark chocolate oxfords.  The style itself makes it my most formal shoes as does the color which is as close to black as you can get.  When paired with a midnight navy suit it’s as close as I need to be to a black suit/black shoe combination.  On the far left is my tan dress boot – by far the most casual of the bunch.  I’ll wear this with full suit from time to time but more often it’s used in a dressed casual role being paired with an odd jacket and trouser.

For the summer months it’s nice to have the option to go with or without socks.  The breeze hitting your ankles can cool you down substantially while making your suit look visually less heavy – personal opinion of course! 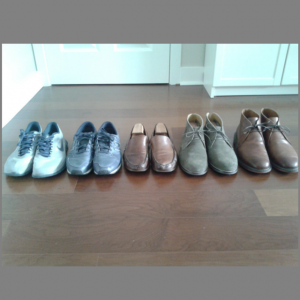 When you talk about individual preferences and style it’s in the casual arena that we see the most variety.  In my case I run the scale of dressy casual to fully casual – right to left as you can see.

On the right are my casual dress boots – in mid brown at the far right and in olive green suede beside it.  Both boots are in the casual group mainly because of their rounded toe box.  The mid brown boot also has a Dainite waterproof sole as opposed to a traditional wooden one which also reduces its formality.  Both a very versatile – capable of being worn with suits in a pinch, to dressed casual all the way down to fully casual use.

Undoubtedly the most versatile shoe in my entire collection is the brown leather loafer in the middle.  I call it the bridge shoe because it can be used in so many situations.  Paired with cotton trousers, a dress shirt and an odd jacket it is perfect for dress casual in the winter months.  At the same time though it’s just as comfortable being worn sockless with shorts and a polo shirt in the summer months.  Not many shoes can boast that level of versatility.  A quick note – this differs from the dress loafer because of the sole.  The dress version has a traditional wooden sole while this is version is the soft rubber.

Last is the trainers – everyone needs a few pairs of great trainers.  The navy leather New Balance are my winter go to – they pair with every possible pant including duty with suits when grabbing a post work pint or just walking home.  The grey Nike Free’s are my summer months go to – more often than not used with shorts though they also pair up nicely with light cotton pants for warmer evenings.

I posted this image last week on my blog – the simplicity of a white leather trainer is hard to beat.  Notice that they’re paired with grey flannels in this case.  When you see the full image it’s actually a full suit – not exactly business appropriate but it looks great nonetheless! 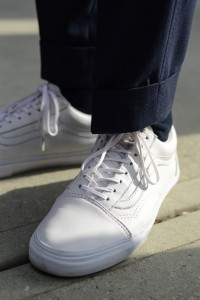 I’d love to hear your take on this subject – comments are always welcome.

Take care – and as always if you have any questions don’t hesitate to get in touch.