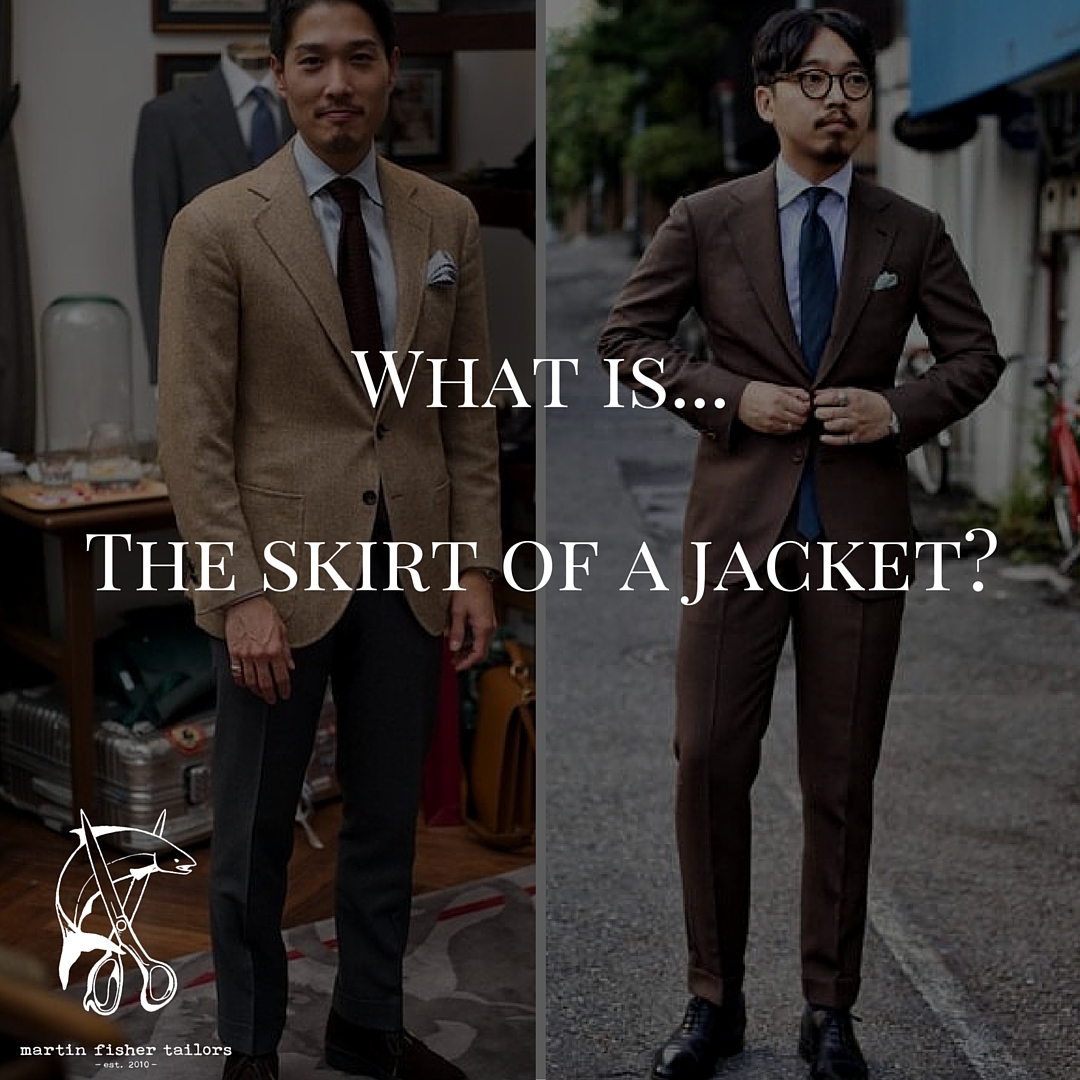 This weekly What is Wednesday post is aimed at answering some of the more basic and critical aspects of tailoring and the terminology we use to describe them. It stems from realizing that I’m constantly throwing out different terms with my clients and quite often they’re unsure as to what I exactly mean.  The goal of this section then is to alleviate this terminology gap and provide you with some know-how to talk tailoring with a little more ease.

What is…the skirt of a jacket?

The skirt simply refers to the bottom third of the jacket – roughly from the level of the second button down to the hem.  You will always find in the skirt the lower front pockets as well as the back vents.

Now that we know what the skirt is – let’s shift to what role it plays with the look and feel of a jacket.  As we learned in What is Wednesday #4 the button stance represents the thinnest part of the jacket; from this point down the jacket’s width is actually increasing in circumference as it transitions into the skirt and sweeps over the hips.  The look and feel of a jacket is really influenced by the amount of flare that is added – or lack there of – as it flows over the hips and the seat.

The difference is clearly shown in the two images above.  The fellow on the left has much more fullness – or width in the circumference – which allows the skirt to softly flow over his hips and seat.  The fellow on the right has little to no ease at all as you can see the jacket is hugging his hips.  If you could see the side view it would be hugging his seat in the same way.  To hammer this home look at each of their right thighs – on the left there is a good two fingers of space whereas on the right there is none.

Which is correct?  Both are – it all depends on the look and feel you want the jacket to give and more importantly is impacted by the proportions of your body. The fellow on the left is much broader in the shoulders and chest; as such he has chosen more fullness in the skirt because it balances out the top and bottom of the jacket. If his jacket hugged his hips it would have the effect of making his chest and shoulders actually appear disproportionate to the rest of his body.  The fellow on the right meanwhile doesn’t have to worry about this as he is rail thin from the top all the way to the bottom.  In this case he has chosen to keep the line of the silhouette quite straight; he equally could push the skirt outwards a bit in an attempt to create a more dramatic sweeping silhouette.  At the end of the day it all comes down to a personal choice.

As always I’d love to hear your opinions on this or any sartorial subject for that matter.  Better yet book a free appointment and we can banter in person and see if we might be a good fit to work together.